Announcing a new web site for teachers of Grade 10 history. warlettersforteaching.ca provides online copies of a set of local First World War correspondence, organized and formatted for use in the classroom. 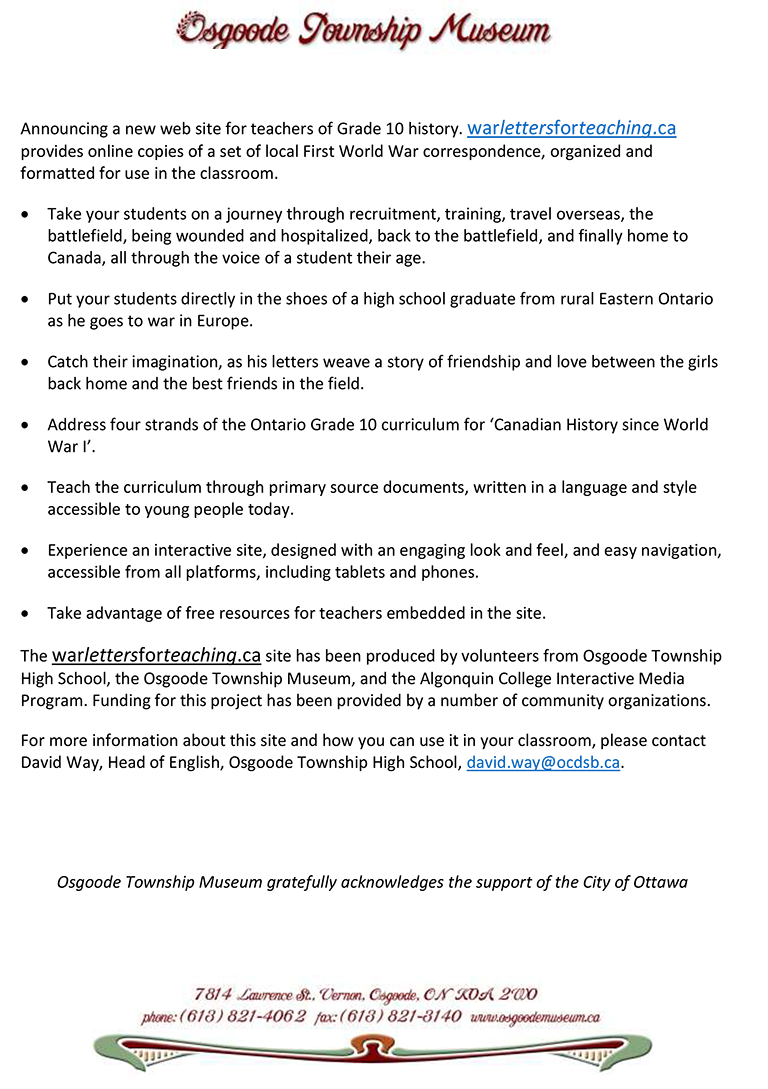 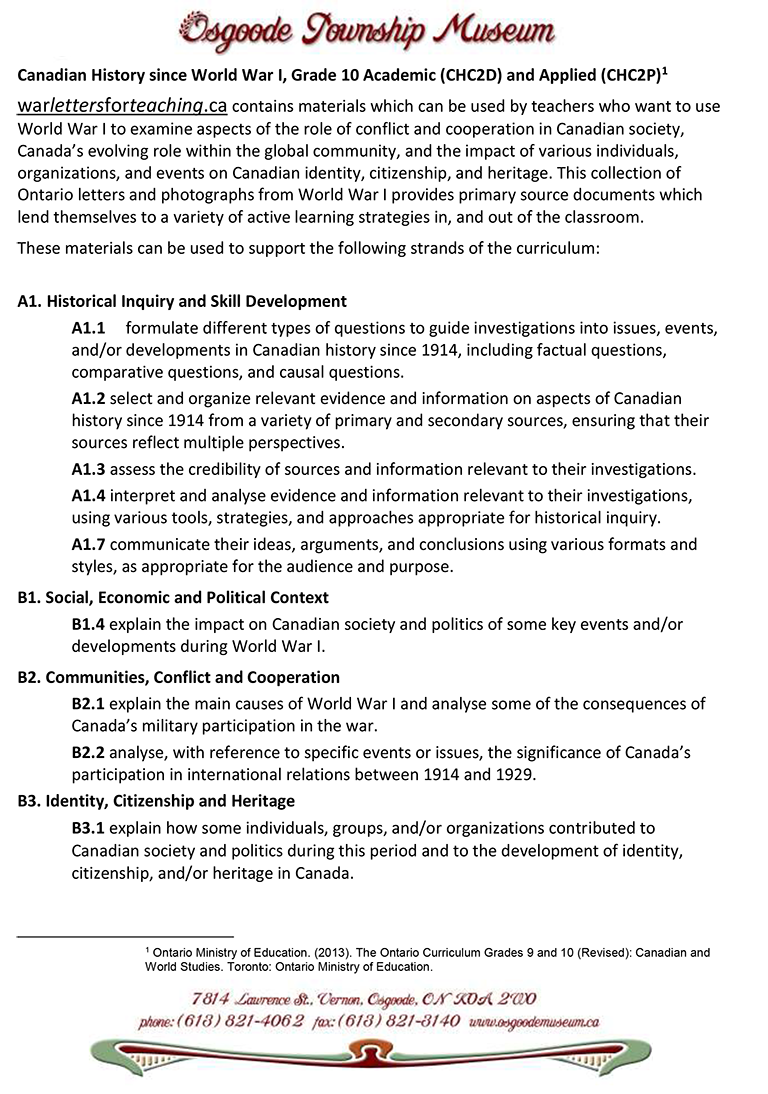 As Elmo moves farther away from home he gets more homesick. What does Elmo miss most about his life at home? Find three quotes that demonstrate the progression and growth of his homesickness.

Canadian soldiers’ letters are censored by their officers. Elmo seems to be focusing on topics not related to the war. List three topics he addresses rather than dealing with the war. What information do you think he is leaving out?

After Elmo is wounded and in hospital, his letters are not censored. What does he tell Fanny in his letters from England that he does not write from France?

There was a huge debate about whether to use forced conscription to recruit soldiers in Canada during the war. What does Elmo think about the idea of conscription?

How do Elmo’s ideas about what it means to be a Canadian change during the war? Find three examples that demonstrate this changing attitude.

4. The war effort in Canadian communities

How are Fannie and her friends contributing to the war effort from Metcalfe?

1. Write a letter from Fannie to Elmo after she hears he is wounded and in hospital.

3. Select five words or phrases that reflect the horrors of war that Elmo experienced.

4. In the voice of a soldier like Elmo, write a letter to home to your parents after being away for two years.

5. Create a list of what you would want sent to you in a care package if you were in Elmo's situation.

6. Select one of Elmo's experiences and create a visual representation of that scene either through a collage of images and words or a drawing.

7. Do some further research into one of the following topics that Elmo's letters explore and create a brief presentation for the class:

Here are eight free on-line resources you can use to learn more about WWI soldiers:

1. Attestation Papers and Enlistment Forms have been scanned for almost all the soldiers who served in the Canadian Expeditionary Force. They can be searched at the Soldiers of the First World War: 1914-1918web page at Library and Archives Canada (LAC). Here you can find information about individual soldiers like their age, dates of birth, address, parents name and address, profession before they became soldiers, marital status, physical description, religion

2. Daily War Diaries kept by each Battalion that fought with the Canadian Expeditionary Force can be found at the LAC web page for War Diaries of the First World War. Reading the war diaries can give you a glimpse of the day-to-day experiences of the soldiers during the war, and provides details of the battles they fought in

3. The Circumstances of Death Registers the Commonwealth War Graves Registers, and the Veterans Death Cards web pages at LAC give information about the soldiers who died during the war, including how they died, their rank when they died, and where they are buried.

4. Details of the deaths and graves of Canadian soldiers are also on the Commonwealth War Graves Commission web site.

5. Canadian Directories: Who Was Where, an on-line database at LAC contains many directories from Ontario from the 1860s up to 1900. Searching these directories can give you a picture of the Ontario communities where soldiers grew up, including all the amenities and businesses, and the transport and government services available.

6. Census records will tell you the age, occupation and family members of the men and woman who were old enough to serve it the First World War. The Census of Canada 1911, is searchable on-line at LAC.

8. Newspapers like the Globe and Mail or the Toronto Star are available in searchable on-line databases. These databases are not free, but many public libraries have bought subscriptions which you can access free though your public library website. Browsing historical newspapers can tell you how the soldier’s families learned about the war at home, and many other things about life in Canada during the period.