Part 3 The journey to England

Tension is rising as the date of departure comes close. Elmo has a misunderstanding with Fannie. 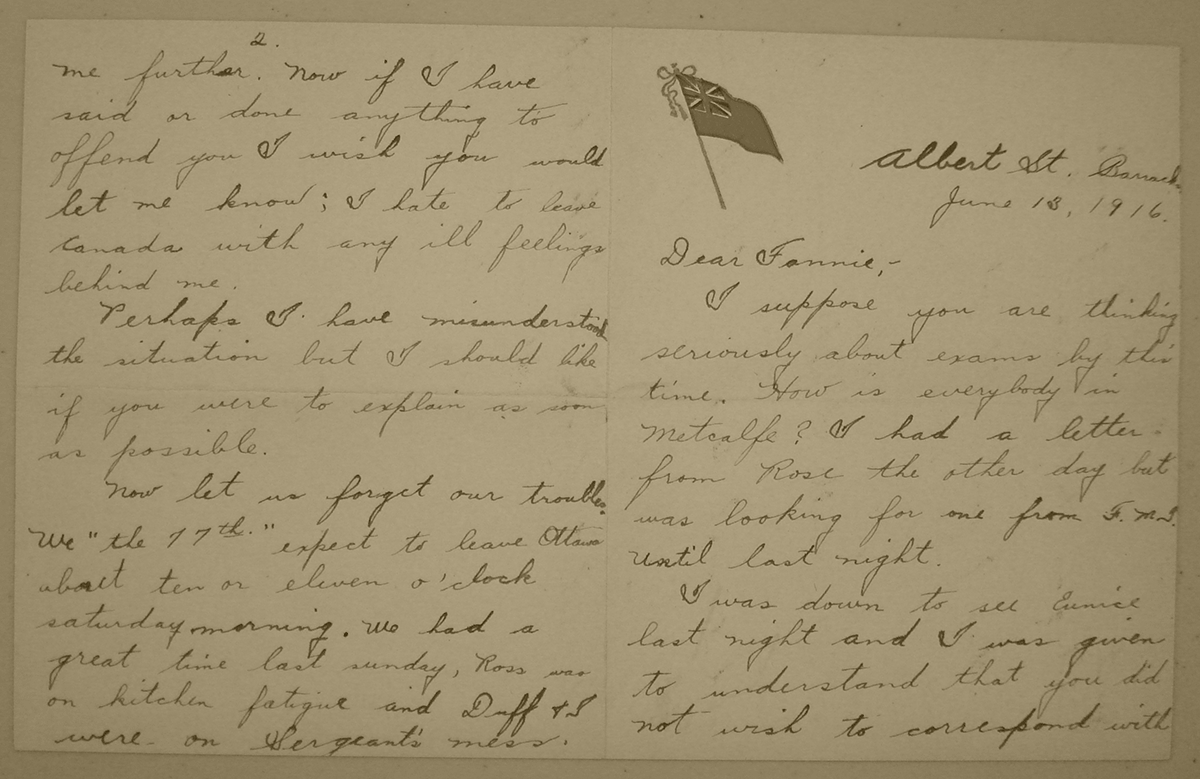 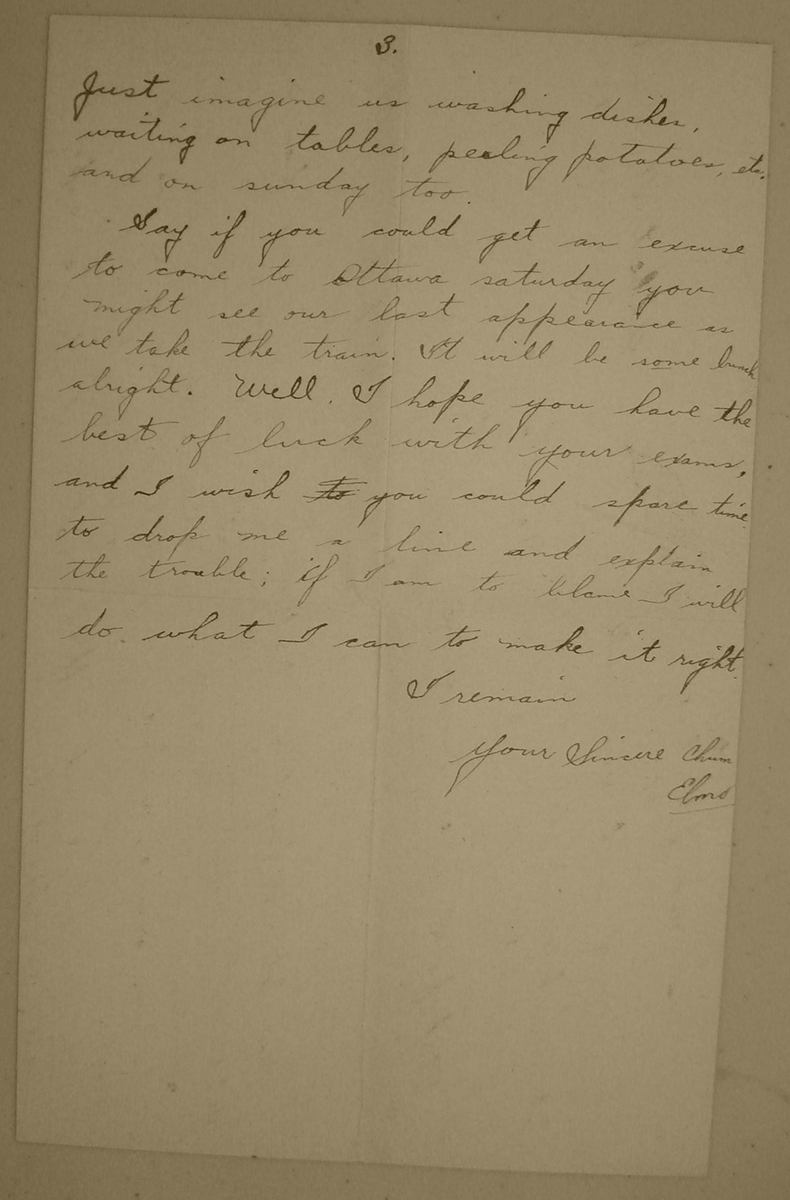 Tension is rising as the date of departure comes close. Elmo has a misunderstanding with Fannie.

Albert St. Barracks,
June 13, 1916
Dear Fannie,
I suppose you are thinking seriously about exams by this time. How is everybody in Metcalfe? I had a letter from Rose the other day but was looking for one from F.M.I. until last night.
I was down to see Eunice last night and I was given to understand that you did not wish to correspond with me further. Now if I have said or done anything to offend you I wish you would let me know; I hate to leave Canada with any ill feelings behind me.
Perhaps I have misunderstood the situation but I should like if you were to explain as soon as possible.
Now let us forget our troubles. We “the 77th” expect to leave Ottawa about ten or eleven o’clock saturday morning. We had a great time last sunday, Ross was on kitchen fatigue and Duff & I were on Sergeant’s mess. Just imagine us washing dishes, waiting on tables, peeling potatoes, etc. and on sunday too.
Say if you could get an excuse to come to Ottawa saturday you might see our last appearance as we take the train. It will be some launch alright. Well, I hope you have the best of luck with your exams, and I wish you could spare time to drop me a line and explain the trouble; if I am to blame I will do what I can to make it right.
I remain
Your Sincere Chum
Elmo

List the ways that the soldiers are being prepared for their war experience.

Describe Elmo’s journey across the ocean. What is his impression of the King?

Elmo is about to leave. He wonders if he will come back as he writes a last letter to Fannie from the barracks.

Albert St. Barracks,
[June 17, 1916]
Saturday 6 a.m.
Dear Fannie,
Hello girlie, how are exams going? Isn’t this beautiful weather.
Well Fannie we will be leaving Ottawa in a couple of hours. I am writing this up on my empty bunk. Everything is cleared up and out. There was a regular mob of people here last night after the church parade but of course nobody came to see me.
I received your welcome letter yesterday. I am glad you have decided to forget the trouble, whatever it was. You will soon be free from school I suppose, I hope you enjoy your holidays but please drop me an odd line if we ever get across.
Well I must finish packing up, we leave the barracks at 9:30. Please excuse this scribbling, I am enclosing a couple of snaps that you may know.
Good-bye Fannie, if you don’t hear from me again, remember me as, - Your sincere friend
Elmo 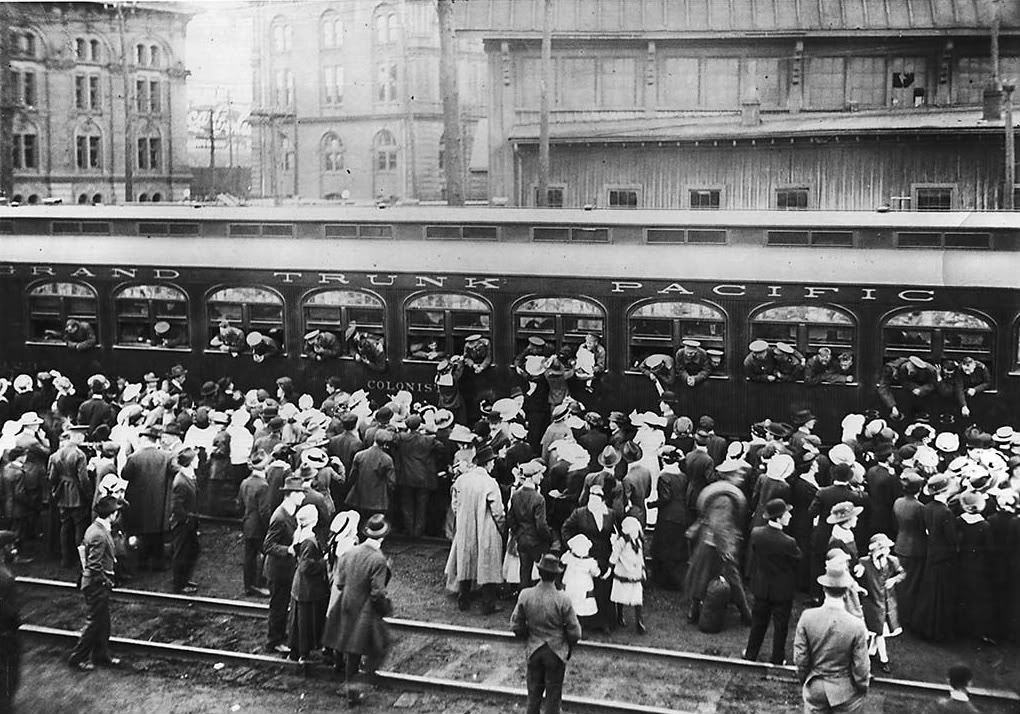 Elmo, leaves Ottawa with the 77th Battalion by train on June 17, 1916, and arrives in Halifax two days later.

June 18 1916.
Dear Friend,
It is 8.15 sunday night here. It will be 7.15 in Metcalfe. We have just passed Newcastle [New Brunswick] and expect to be in Moncton [New Brunswick] about 9 P.M. and in Halifax [Nova Scotia] to-morrow morning. We are having a great trip. I will try and drop a letter before we leave Halifax. I hope your exams are not too hard. Remember the main thing is not to worry.
Good-bye. E.A.S. 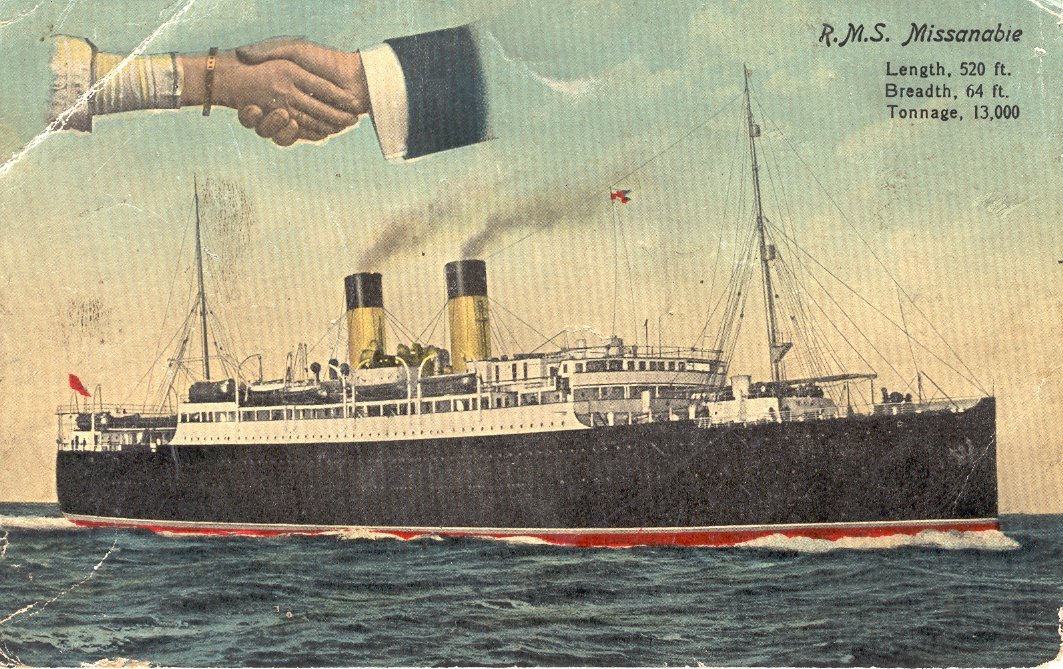 Elmo’s Battalion boards the R.M.S. Missanabie for the dangerous voyage across the Atlantic. The Missanabie is a Canadian Pacific ship, built in 1914 to carry 520 cabin-class passengers and 1,200 in 3rd Class. June 19 the Missanabie leaves Halifax and arrives in Liverpool, England, nine days later on June 28. She will cross the Atlantic many more times between Liverpool and Montreal, Quebec and Halifax throughout the war, until she is sunk by a German submarine in 1918.

Elmo’s Battalion board’s the S.S. Missanabie for the dangerous voyage across the Atlantic. The Missanabie is a Canadian Pacific ship, built in 1914 to carry 520 cabin-class passengers and 1,200 in 3rd class. June 19th the Missanabie leaves Halifax and arrives in Liverpool, England nine days later on June 28th. She will cross the Atlantic many more times between Liverpool, and Montreal, Quebec and Halifax throughout the war until she is sunk by a German submarine in 1918.
[Post Card]
June 30, 1916.
Dear Friend,
We have arrived in England safely. My address for now will be as shown in the corner. Hoping to hear from you soon, Pte ----- I remain as before. E.A.S.
A Company, 77 Battalion,
Bramshott Camp,
England 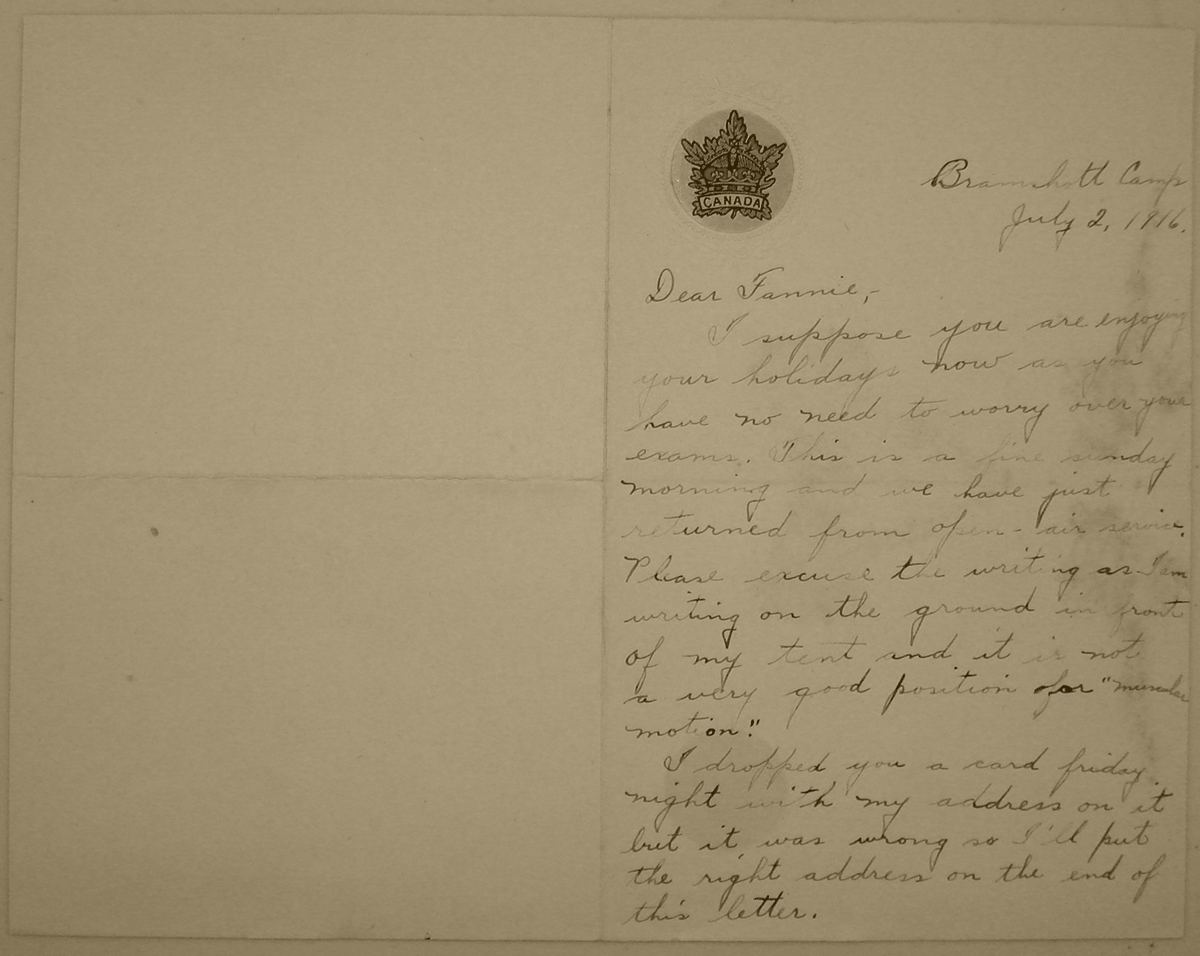 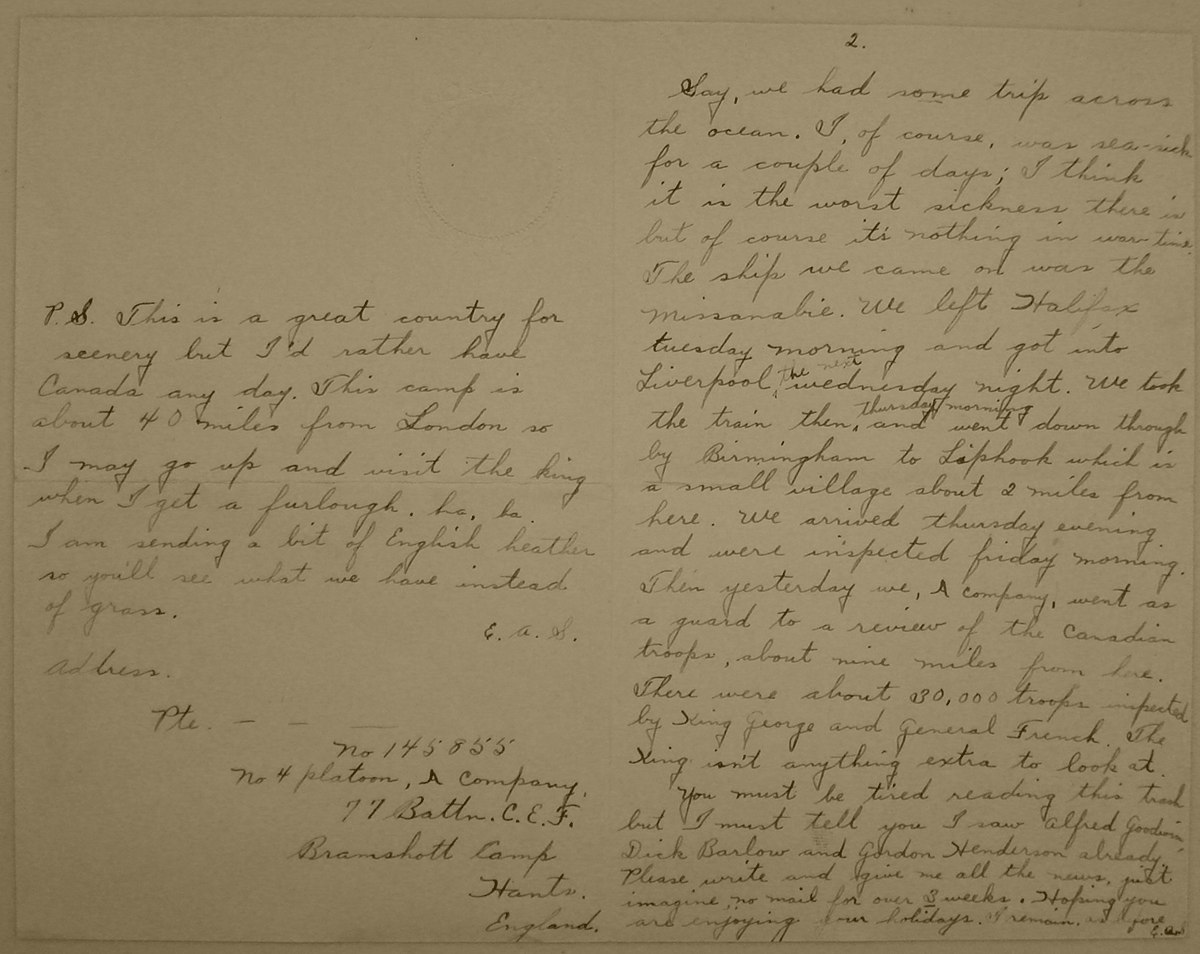 Elmo and the 77th join more than 30,000 Canadian soldiers at Bramshott Camp. They camp under canvas on Bramshott Common, Hampshire, southwest of London, and begin training.

Bramshott Camp
July 2, 1916
Dear Fannie,
I suppose you are enjoying your holidays now as you have no need to worry over your exams. This is a fine sunday morning and we have just returned from open-air service. Please excuse the writing as I am writing on the ground in front of my tent and it is not a very good position for “muscular motions”.
I dropped you a card friday night with my address on it but it was wrong so I’ll put the right address on the end of this letter.
Say, we had some trip across the ocean. I, of course, was sea-sick for a couple of days; I think it is the worst sickness there is but of course its nothing in war-time. The ship we came on was the Missanabie. We left Halifax tuesday morning and got into Liverpool the next wednesday night. We took the train then, thursday morning and went down through by Birmingham to Lipshook which is a small village about 2 miles from here. We arrived thursday evening and were inspected friday morning. Then yesterday we, A Company, went as a guard to a review of the Canadian troops, about nine miles from here. There were about 30,000 troops inspected by King George [V] and General French . The King isn’t anything extra to look at.
You must be tired reading this trash but I must tell you I saw Alfred Goodwin, Dick Barlow and Gordon Henderson already. Please write and give me all the news, just imagine, no mail for over 3 weeks. Hope you are enjoying your holidays.
I remain as before.
E.A.S.
P.S. This is a great country for scenery but I’d rather have Canada any day. This camp is about 40 miles from London so I may go up and visit the king when I get furlough. ha, ha. I am sending a bit of English heather so you’ll see what we have instead of grass.
Pte.--- No 145855
No 4 platoon, A Company,
77 Battn. C.E.F.
Bramshott Camp
Hants, England